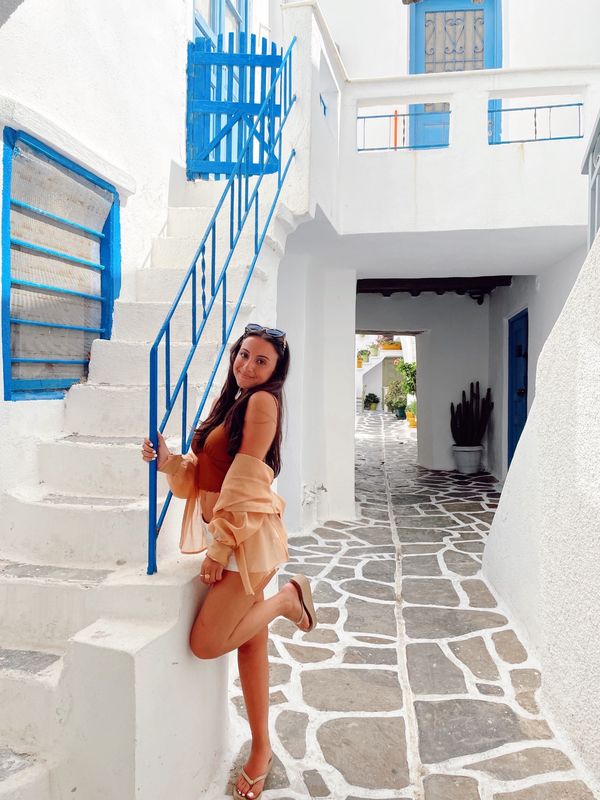 This summer, after two years, I was finally able to visit the homeland again: Greece.

If you know me, you know I’ve traveled to Greece and Cyprus almost every year of my life. These two countries are quite literally my homes away from home. When I am there, I can speak a different language, live in a different house, eat different food, and spend time with extended family and friends I’ve made over the years.

This year, I had the opportunity to visit three new islands in Greece: Naxos, Paros and Mykonos. After one week in Greece, I spent two weeks in Cyprus. In my next few posts, I will be sharing where I went and what I did in each location, starting with the calm and beautiful island of Naxos.

After one eight hour flight and one five hour ferry, I had finally arrived in Naxos. A journey I have gotten used to over the years, but still tiring nonetheless. My sister and I had met two of our friends in Athens and traveled with them on the ferry to Naxos.

We reached the port at 11 p.m., now seven hours ahead of New York Eastern time. Jet lag had clearly not set in when we decided to explore the town around our hotel, but once we saw the view from the port it was hard to resist. Our hotel was located further from Chora and the port, in a more calm area with restaurants lined up down the shore, which was more fitting to explore on our first night.

Because Naxos is a calm island, and because we were tired from traveling, our first day in Naxos was spent relaxing by the pool at our hotel. The pool on the upper deck had four sunbeds, perfect for us to have space to ourselves, and an amazing view overlooking the town with the beach in the distance. This day was the most tanning we did in Greece, because we spent every other day island hopping, shopping and exploring the old towns of each island.

Our hotel room also had a private hot tub with a lower view where the mountains in the distance were visible.

On the second night, and our last night in Naxos, we explored Chora, the old town by the port. We ventured around the town and stopped at a bar for drinks and dessert. I ordered a cosmopolitan and loukoumades, a Greek dessert of fried dough dipped in honey and covered in cinnamon and sesame seeds. In the distance from our walk, we caught a glimpse of Portara, the iconic door-like ruins known as the temple of Apollo, overlooking the city and the sea.

Outfit of the night:

And just like that, our time in Naxos was coming to an end. On our final morning, we ate breakfast at the hotel, which included many fruits and frappes. Before catching our ferry to our next destination, Paros, we had lunch at a colorful little cafe by the port and went shopping in the old town. We also got the chance to see Chora and the Portara in daylight before we left.

A trip to the Greek island of Paros. Exploring the old town, dinner by the water, boating and beach days.

A global pandemic. The Black Lives Matter Movement. One of the most controversial elections. And much, much more. I think we can all agree 2020 had its fair share of downsides, but for me, 2020 was a year that I accomplished a lot and came to many new realizations.

A Britney Spears-inspired post about my favorite denim looks and where to shop for the best pieces.